The following research is based on the process and content of my graduation project named “Nicely Nicely all the time! ”, the objective is to explain the 3D modeling, 3D photogrammetry and face tracking, which I have applied over the course of my project. Besides this, I intend to intensively discuss the biases and discrepancies of the use of algorithms and data in the processes of utilizing and testing the programs, in addition to the impact of discrimination and prejudice on real-life situations and data.

Later in my research I stumbled across Safiya Umoja Noble’s book ‚algorithms of oppression’. In it, she discusses how „The near-ubiquitous use of algorithmically driven software, both visible and invisible to everyday people, demands a closer inspection of what values are prioritized in such automated decision-making systems.“ and she asks „that the misinformation and mischaracterization should stop“.

I wonder if engineers would stop building biased technologies if they realized that the languages and algorithms within their programs should be equally impartial to all of us.

TESTING THE 3D FACE RECONSTRUCTION FROM A SINGLE IMAGE

As illustrated here, in this experiment I use a photograph of myself (Asian), looking from the side, the face model produced through 3D Face Reconstruction is not Asian. At this point, we could say that the computational mode is based on a Caucasian outline or bone structure. In general, Asian don’t have such high brow ridge and nose bridge. I am not the only one who has noticed this an issue, the following is an excerpt of what another user called Blindsaypattern published on MakeHuman forum. At this point, I applied the bones of Meta-Rig to match the model. As the bones that the Meta-Rig provided were of Caucasians, I had to adjust the structure of the bones, such as the nose and the brow ridge, to match the bones and the model(Asian).
In a sense, as the skeleton could automatically fit the plug-in program, it only required one basic skeleton.
However, why it is based on a masculine skeleton of a Caucasian?

AN ACCOUNT OF JOY BUOLAMWINI, A GRADUATE STUDENT AT MIT Case I
When Buolamwini was working with facial analysis software she noticed a problem: the software didn’t detect her face. It turned out that the algorithm was never taught to identify a broad range of skin tones and facial structures. As a result, the machine failed to recognize her face, however, when she would wear a white mask, it successfully detected the mask.

THE CASE OF RICHARD LEE THE ISSUES OF FACE ID MISFUNCTION Screenshot from the Sun News, Photo from Shandong TV Station. https://www.thesun.co.uk/news/5182512/chinese-users-claim-iphonex-face-recognition-cant-tell-them-apart/ [visited May 20, 2018]

A news piece regarding the issues of Face ID malfunction tells the story of a Chinese boy who can unlock his mother’s iPhone by using the Face ID. An Asian men posted a [asian Face ID FAIL] video on YouTube, illustrating that his girlfriend can use the Face ID to unlock his smart phone. It will even accept online payments using the face recognition payment account.

Artificial intelligence makes more errors in the computation of data of Asians and black people. The reason for this is that the developers of these softwares haven’t trained their machines to equally calculate each human race. Its however absolutely crucial to design an unbiased database. Here are some things I came up that relate to this problem:

The idea, however, is merely to attempt to avoid significant errors and/or deviations. Once the database is not supervised for impartiality, from an ethical point of view, the AI that learned from this database is utterly meaningless, or not equipped with virtuous moral standards and deviates from all principles of fairness, justice and righteousness.

Below are some existing large-scale database, which I accessed to survey and analyse a sample

THE STORY OF TAY The artificially intelligent chatbot Tay was launched on Twitter by Microsoft on March 23, 2016. Tay was designed to mimic the way a 19-year-old American female speaks and to continue its learning online through interactions with the Twitter users. Only one day after its introduction, Tay started to publish radical remarks followed by racial and discriminatory slur. After communicating with the Twitter users, Tay was largely affected by some users’ radical comments and had started to mimic them. Consequently, Microsoft was forced to temporarily shut down Tay’s account on Twitter. Twitter taught Microsoft’s AI chatbot to be a racist in less than a day YouTube-8M is a large-scale labeled video dataset that consists of millions of YouTube video IDs and associated labels from a diverse vocabulary of 4700+ visual entities.

I analyzed the videos using hashtag #street-fashion (183 in all).

In each video, subjects of the same race are calculated as a whole, for example, while there are five Caucasians and one Asian in a video, the statistics only indicate one Caucasian and one Asian. 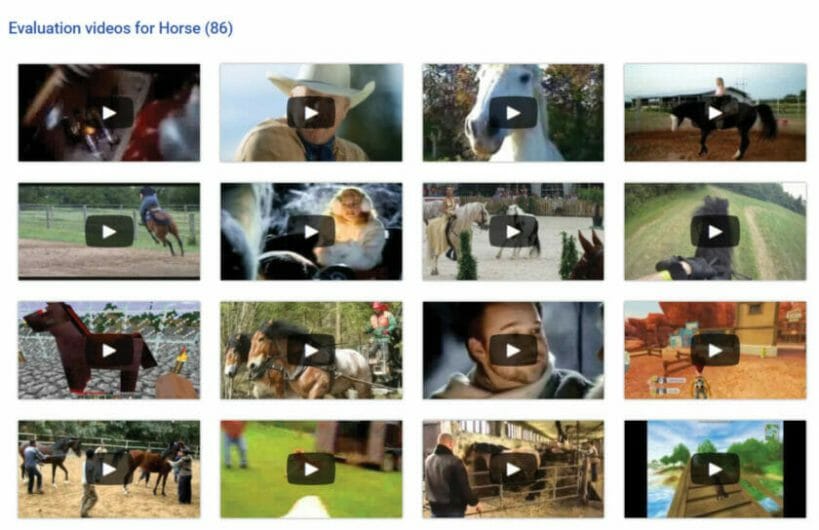 AudioSet consists of an expanding ontology of 632 audio event classes and a collection of 2,084,320 human-labeled 10-second  sound clips drawn from YouTube videos.

This database can be used to training a chatbot.

Talking about the videos of horses, amongst the 86 videos, there are the following number of persons riding a horse screenshot of database by #Babycrawling

The database collets a range of videos featuring 101 kinds of daily activities of human beings, I picked some of them and calculated the data as follows,

Above is my analysis of the major large-scale databases using different hashtags. Clearly, the collection of these databases about human behaviors, sounds and visions is all predominantly from Caucasian.

In the majority of the programs I use, the boning, skin, texture, hair and height of the body are all designed to represent Caucasian body types. As a result, it is extremely difficult and demanding to create an Asian, African or brown-skinned avatar. As the Caucasian 3D avatar is the base of all possible models, I had to make the choice to either go through the labour intensive process to modify this base so it would no longer show, or make a compromise.
This is the only way to cohesively match the two races as a whole. This is why there is some form of incompatibility laced throughout my work. I think a lot of automatic 3D modeling softwares have a certain degree of racial bias. Although the human face has the same structure, the differences lie in the details. If these differences are ignored during the engineering process of the software, when all Avatars are modelled, the program will be built following discrimination and prejudice.